Atalanta Bergamasca Calcio, commonly referred to as Atalanta, is a professional football club based in Bergamo, Lombardy, Italy. The club plays in Serie A, having gained promotion from Serie B in 2010–11.

Atalanta was founded in 1907 by Liceo Classico Paolo Sarpi students and is nicknamed La Dea, the Nerazzurri and the Orobici. The club plays in blue-and-black vertically striped shirts, black shorts and black socks. The club plays its home matches at the 21,747-seater Gewiss Stadium. In Italy, Atalanta is sometimes called Regina delle provinciali (queen of the provincial clubs) to mark the fact that the club is the most consistent among Italian clubs not based in a regional capital, having played 62 in Serie A, 28 seasons in Serie B, and only one in Serie C. Atalanta has a long-standing rivalry with nearby club Brescia.[4][5]

The club is also famed for its youth academy, which has produced several notable talents who have played in the top leagues of Europe.[6]

The club won the Coppa Italia in 1963 and reached the semi-finals of the Cup Winners' Cup in 1988, when it was competing in Serie B. This is still the best-ever performance by a non-first division club in a major UEFA competition (together with Cardiff City). Atalanta also participated in five seasons of the UEFA Europa League (previously known as the UEFA Cup),[a] reaching the quarter-finals in 1991 and in 2022. Atalanta additionally qualified for the UEFA Champions League three times, reaching the quarter-finals in 2020. 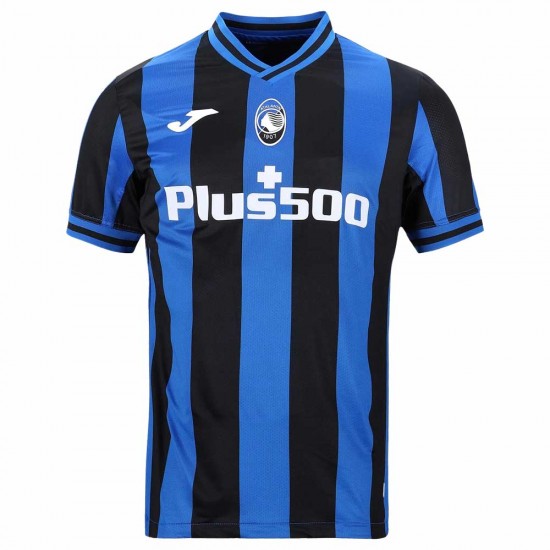 Brand: Joma
[Player Edition] Atalanta 2022/23 Home Match Shirt
PRODUCT DESCRIPTION Atalanta BC's first official short-sleeved shirt for the 2022/2023 season.  This shirt shows more than ever the club's distinctive signs: the blue and black striped design, the print with the motto 'The sweaty jersey always' and, under the collar, there is the writing ..
RM299.00
Add to Cart
Add to Wish List
Buy Now Question
Showing 1 to 1 of 1 (1 Pages)